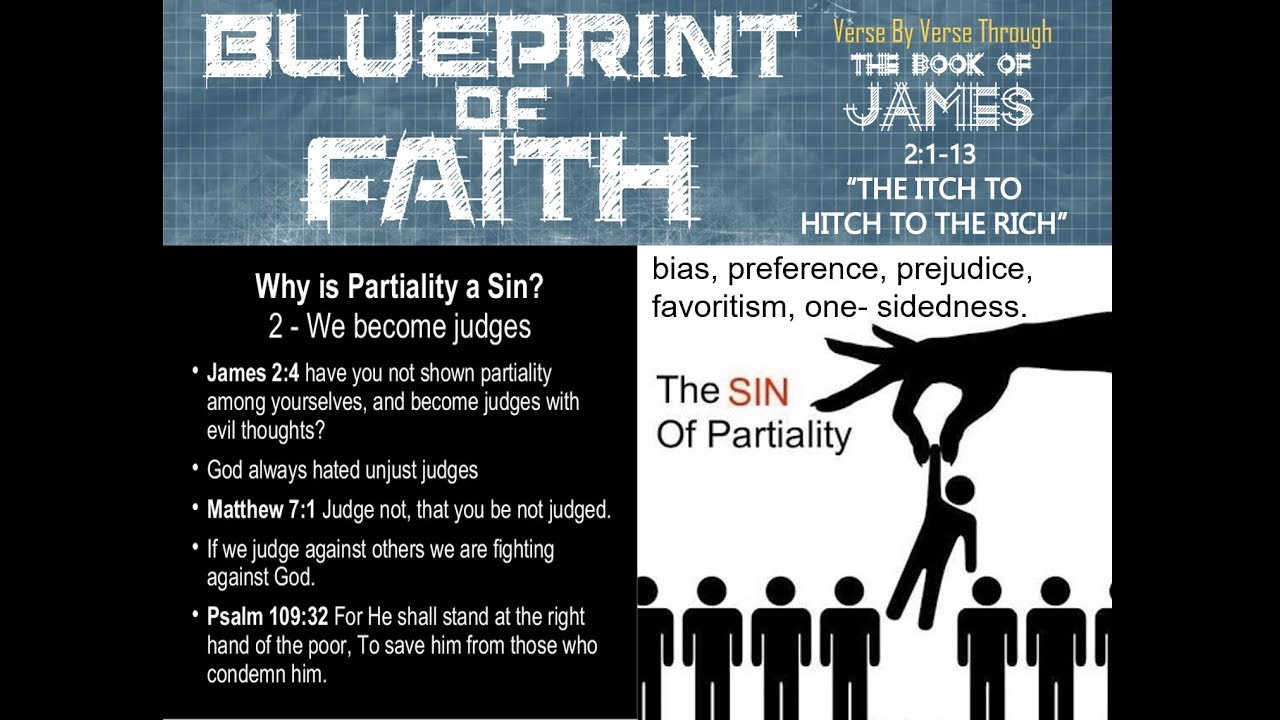 The parents of one of my old high school friends used to counsel us, “There are 3 types of people you will meet in life: 1) People who like you, 2) People who don’t like you, and 3) People who don’t care. Focus on the first group and don’t waste your time on the other two.” That was sound advice and it actually seems kind of obvious when I think about it today. Why would we worry about what people who don’t like us think? Why would we want to be around people who don’t care about us? But as we see in today’s passage in James, our fallen sinful nature often craves the popularity of being part of the “in crowd,” even if that crowd is not very nice to us or others. And because money buys stuff that others want as well as power and status, the “in crowd” can often be the rich.

James asks us to consider whether or not we give special favor and attention to people who are rich while at the same time ignoring and looking down upon those who are poor. If we do, then we are guilty of a very great and foolish sin in God’s sight. It is a great sin because God does not show such favoritism to people. God judges people by their character and their faith, not their material possessions. If anything, being rich is more often an obstacle to a person’s salvation because the rich tend to be self-reliant and unable to see their need for God. It was the poor who flocked to see Jesus in His day and enter His kingdom much more so than the rich, and this has continued to be the case for 2,000 years of church history. Favoring the rich is also a foolish sin because the rich are the ones more likely than the poor to mistreat and ignore us and our Savior. We are wasting our attention and affections on those people who don’t like us and our faith or who don’t care about us one way or the other. May we repent of our evil desires to be accepted by the “in crowd” and instead choose the better fellowship of the humble who walk with Jesus.

2 My brothers and sisters, believers in our glorious Lord Jesus Christ must not show favoritism. 2 Suppose a man comes into your meeting wearing a gold ring and fine clothes, and a poor man in filthy old clothes also comes in. 3 If you show special attention to the man wearing fine clothes and say, “Here’s a good seat for you,” but say to the poor man, “You stand there” or “Sit on the floor by my feet,”4 have you not discriminated among yourselves and become judges with evil thoughts?

5 Listen, my dear brothers and sisters: Has not God chosen those who are poor in the eyes of the world to be rich in faith and to inherit the kingdom he promised those who love him? 6 But you have dishonored the poor. Is it not the rich who are exploiting you? Are they not the ones who are dragging you into court? 7 Are they not the ones who are blaspheming the noble name of him to whom you belong?

As we saw in the last post, God does not have much respect for big talkers who don’t practice what they say they believe. Today in the end of James 1 we see some specific examples of what it looks like to be “doers and not just hearers” of God’s commands. First, Christians who are truly walking with Jesus will have control over their words. They will not let harmful gossip, angry comments, or filthy language pour out from their mouths. Why? Because evil words reveal an evil heart that is far away from God. Second, real Christians care for other people, not just for themselves. This is particularly seen in taking care of orphans, or children without parents, and widows, meaning women without husbands. God has a special compassion for helpless and needy people like these, and so should we as Christians. Finally, true religion in God’s eyes is to stay pure in our thoughts, words, and actions. Some stuff in this world is just plain wicked and wrong. Blatant and obvious sin should offend and hurt our consciences as Christians. We should make every effort to avoid every form of evil as much as we can so that we can keep clean and close with God. Jesus taught that it is the pure in heart who will see God.

Only two verses for today, but they pack a powerful punch! Today’s Scripture shoots us right in the heart like a spiritual laser. Most of us talk too much and too carelessly. Few of us care for the needy people around us as we should. All of us could do better at avoiding sin and worldliness. My prayer is that we would let God’s Word do its work of sanctification today. May His Spirit keep making our words, deeds, and thoughts more holy so that we might become more perfect like our Father in heaven. In the end, His opinion of our religion is the only one that really matters.

26 Those who consider themselves religious and yet do not keep a tight rein on their tongues deceive themselves, and their religion is worthless. 27 Religion that God our Father accepts as pure and faultless is this: to look after orphans and widows in their distress and to keep oneself from being polluted by the world.

My brother is a sergeant first class in the army. He has served tours of duty in Iraq and Afghanistan. At one point in his life, he was a drill sergeant. He would do morning PT with his “grunts” who “weren’t getting any older” and then work out in the gym on his own in the afternoons. The last time he and I worked out together, he pushed me so hard that I could not lift a hamburger that night at dinner. He is a no-nonsense kind of guy. One of his favorite sayings is, “Deeds, not words.” This phrase is an English translation of a popular Latin motto used by Roman soldiers, the original no-nonsense tough guys in world history.  And this mantra perfectly captures James’ message for us in today’s passage.

God does not want us to just listen to His Word or even talk about it, but to do it, to apply it to our everyday lives. As Christians, our motto should be “Deeds and words.” It is important for us study the Bible and listen to it preached and taught. And it is important for us to talk about our faith with other believers and to share it humbly with non-Christians. But we also need to put our beliefs into action. We don’t want to be people who read or hear God’s Word and then ignore the voice of the Spirit applying it to our lives. James says such foolishness is like people looking into a mirror but then forgetting their own faces! Can you imagine seeing crazy hair or dirty skin in the mirror in the morning but then not using a brush or washcloth to fix the problem? It would be ridiculous! In the same way, if we know that God’s Word has spoken to an area of sin in our lives that we need to repent of, or guided us to an action that we need to take, and then we don’t obey God’s voice, we are acting like fools. The wise person listens carefully to what God’s Word has to say and then does it. Such people find the joys and blessings of faithfully following Christ. Don’t you want to be a wise and blessed person today? May all lead lives filled with deeds of faith that back up our words of faith.

22 Do not merely listen to the word, and so deceive yourselves. Do what it says.23 Anyone who listens to the word but does not do what it says is like someone who looks at his face in a mirror 24 and, after looking at himself, goes away and immediately forgets what he looks like. 25 But whoever looks intently into the perfect law that gives freedom, and continues in it—not forgetting what they have heard, but doing it—they will be blessed in what they do.