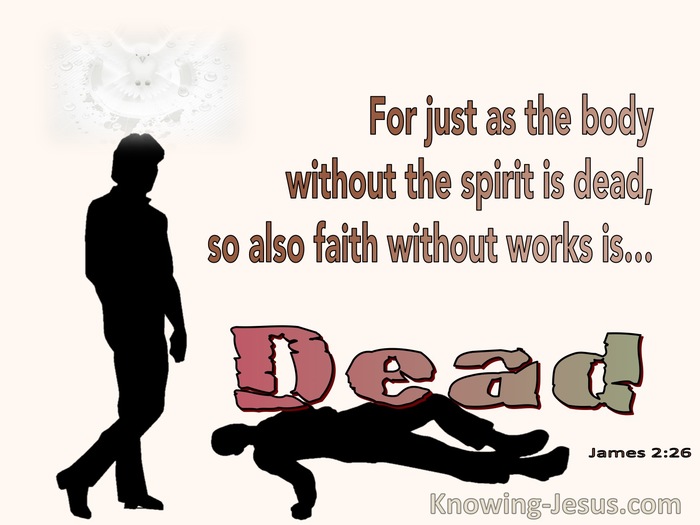 Most of the Bible is written in the form of true stories that teach us about ourselves and God. The Gospels are told as stories about the birth, ministry, death, and resurrection of Jesus. The Book of Acts tells the real life adventures and experiences of the apostles and the early church. But James appeals in today’s passage to two famous stories from the Old Testament to prove his point that genuine faith will lead people to take action for God. When God told Abraham in Genesis 22 to sacrifice his long-awaited son Isaac as a burnt offering, Abraham trusted that God would raise his son from the dead (see Hebrews 11:19). In faith Abraham obeyed God and was about to plunge the knife into his strapped-down child before the angel of the Lord stopped his hand. Abraham proved through his obedient actions that He loved God the Giver more than his son the gift.

We might argue that the prostitute Rahab’s faith was even greater. She risked her own life and the lives of her entire family when she hid the Israelite spies from the searching men of Jericho and then sent the soldiers in the wrong direction. Rahab must have feared the king and guards of Jericho, but she chose to fear the God of Israel more. By faith, Rahab took action to serve the God of Israel and help his people escape. As a reward, Rahab and her family were spared death during the destruction of Jericho. Even more importantly, she married into the nation of Israel and became part of the family line of the Lord Jesus Christ. What an incredible reward!

The entire Old Testament is filled with such examples of men and women whose faith led them to take action for God. An important reason for including such stories in the Bible is to teach us what biblical saving faith looks like so that we can imitate it. True, we will often sin and fail in our attempts to pursue the Lord’s will in our lives. Many times as Christians, our fear may win out over our faith. But if we are truly saved, there should still be some evidence in our lives of godly actions, things we’ve done because of our faith in Jesus. If we look hard at our lives and see that our faith never produces any active obedience to Christ’s commands or sacrifices for Him and the gospel, can we really say that our faith is alive? May we all have the kind of living and active faith that we see commended in God’s Word.

20 You foolish person, do you want evidence that faith without deeds is useless? 21 Was not our father Abraham considered righteous for what he did when he offered his son Isaac on the altar? 22 You see that his faith and his actions were working together, and his faith was made complete by what he did. 23 And the scripture was fulfilled that says, “Abraham believed God, and it was credited to him as righteousness,” and he was called God’s friend. 24 You see that a person is considered righteous by what they do and not by faith alone.

25 In the same way, was not even Rahab the prostitute considered righteous for what she did when she gave lodging to the spies and sent them off in a different direction? 26 As the body without the spirit is dead, so faith without deeds is dead.