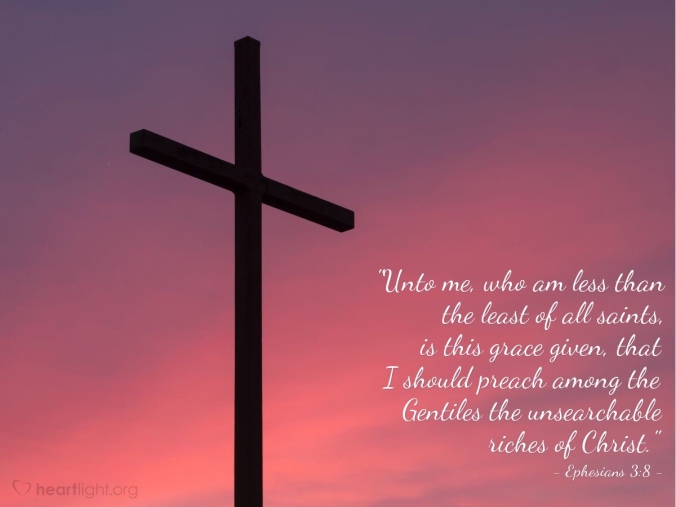 The apostle Paul never got over the grace that God had shown to Him. He had been Saul, an enemy of the church, a persecutor of Christians, and a legalistic man blind to his own self-righteous pride. But in His amazing grace, the Lord had confronted Paul on the road to Damascus, broken his angry heart and stubborn will, and given him a new life and second chance through a personal faith in Jesus Christ. He went from being Saul, a destroyer of God’s people, to Paul, a missionary and church planter. Overnight he went from being super passionate about his Jewish heritage to being Christ’s first great ambassador to the nations, suffering all manner of hardships, prison sentences, and even death for the sake of the Gentiles he once condemned. Paul considered His divine calling to preach the gospel to all the known world to be the greatest possible privilege. That he could help swing open the door of salvation for peoples to whom the One True God had been a stranger for many centuries constantly brought Paul to his knees in thanksgiving and praise.

In today’s passage, Paul is about to tell the Ephesians once again about his unceasing prayers for their spiritual growth and well-being. That’s what’s happening in verse 1 of chapter 3, a thought which he starts and then will continue in verse 14. But he interrupts himself in verses 2-13 to reflect on his call and ministry. He wants the Ephesians to understand the great mystery that was predicted in the Old Testament but was then being fulfilled in his lifetime, namely that Gentiles who had been without God could now join God’s family of believing Israelites through their shared faith in the Messiah, Jesus Christ. Most of Paul’s audience, like most of us today, were Gentiles, people from nations and tribes who had been outside of the covenants of promise that God had made with Abraham, Jacob, Moses, and David. They had been lost, alone, and without God. But through Jesus, they now had a hope of salvation, too. And Paul was blessed to be able to bring that message of Good News all over the eastern Mediterranean world, just as we, too, are blessed to be able to carry the gospel of peace to everyone we meet.

1 For this reason I, Paul, the prisoner of Christ Jesus for the sake of you Gentiles—

2 Surely you have heard about the administration of God’s grace that was given to me for you, 3 that is, the mystery made known to me by revelation, as I have already written briefly. 4 In reading this, then, you will be able to understand my insight into the mystery of Christ, 5 which was not made known to people in other generations as it has now been revealed by the Spirit to God’s holy apostles and prophets. 6 This mystery is that through the gospel the Gentiles are heirs together with Israel, members together of one body, and sharers together in the promise in Christ Jesus.

7 I became a servant of this gospel by the gift of God’s grace given me through the working of his power. 8 Although I am less than the least of all the Lord’s people,this grace was given me: to preach to the Gentiles the boundless riches of Christ,9 and to make plain to everyone the administration of this mystery, which for ages past was kept hidden in God, who created all things. 10 His intent was that now, through the church, the manifold wisdom of God should be made known to the rulers and authorities in the heavenly realms, 11 according to his eternal purposethat he accomplished in Christ Jesus our Lord. 12 In him and through faith in him we may approach God with freedom and confidence. 13 I ask you, therefore, not to be discouraged because of my sufferings for you, which are your glory.

1. How can you avoid taking your access to the gospel and the Word of God for granted? How can you help yourself to stay grateful for the many opportunities you have had over the years to hear about Jesus and respond to the gospel in repentance and faith?

2. Do you consider it a great privilege to be able to share Jesus with the unbelievers in your life? Do you consider witnessing about Christ to the lost to be one of the great responsibilities of being a Christian? Why or why not?

3. In what ways have you seen God’s works of grace in your life?

• The word translated as “mystery” in this passage does not mean a deep riddle or puzzle that no one can ever figure out. Instead, Paul uses the term “mystery” to describe something that was a hidden secret in the past that has now been fully revealed. The expansion of salvation to the Gentiles (non-Jews) was hinted at throughout the Old Testament, but it was not fully understood, demonstrated, and explained until the beginning of the church era as we see in the book of Acts and Paul’s letters to the churches.

• Notice in verses 11 and 12 that understanding our new position in Christ should give us confidence and assurance as we approach the Lord in prayer and live out our new Christian lives in humility before Him who saved us from our sins. The epistles constantly use doctrinal teachings about who we are in Christ to urge us on to living in ways that honor Him.