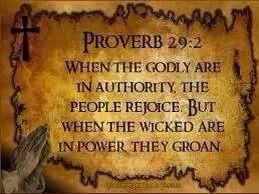 As the leaders go, so go the people. When a government is righteous and honors God and His commands, then the nation will enjoy peace and prosperity (Proverbs 28:12a, 29:2a). We think of the early years of our own nation, the United States of America, when many of our elected officials were either Christians or sympathetic to Christianity. Our society was more moral and religious and virtues like hard work, freedom, and sacrifice were common among the American people. Then we contrast that era with modern America, where laziness, dependence, and selfishness afflict every generation from young to old. We are living in a time with many wicked leaders who do not know the Lord or respect His laws. Christians are being forced to be careful and clever with how they display their faith in public, so that good men and women do “hide themselves” from an increasingly evil government (Proverbs 28:12b). And the whole nation suffers from the bitter economic and social effects of our sins that have trickled from the top down to the common people (Proverbs 28:2). The gap between rich and poor grows wider and wider in our country, for example, while depression and suicide rates are at all time highs.

How does this passage apply to us average people today? First, we should pray for our government and its leaders. God tells Christians that we should pray for everyone, especially for “kings and all who are in authority” (1 Timothy 2:1-2). Rather than just complain, we should take our burdens about our government’s condition to the Lord. Even today, for example, we can pray for the President and Senate to receive wisdom from God in appointing a new Supreme Court Justice this fall. Secondly, we should vote for candidates who are most likely to support biblical principles and protect Christian freedoms. We want to vote and advocate for a government that allows churches and Christian organizations to be salt and light in our nation. As middle and high school students, you are not yet old enough to vote, but you will be in just a few years. Now is the time to begin following current events and studying government and the important issues that our leaders face today. Finally, we should seek to be the best American citizens that we can be. Christians ought to be the best kind of citizens. We ought to model the virtues of our forefathers, working hard, being honest, and giving to those in need. We should obey the laws of our land to the best of our ability. As students, you are learning right now to submit to your parents and teachers so that you will submit to God, the government, and your bosses once you reach full adulthood. Let us not be like the wicked leaders who never listen to correction and truth and eventually fall (Proverbs 29:1). Instead, let us accept the authorities that God has placed over us and submit to their rule as unto the Lord.

28:12 When the righteous rejoice, there is great glory; But when the wicked arise, men hide themselves…

28:28 When the wicked arise, men hide themselves; But when they perish, the righteous increase.

29:1 He who is often rebuked, and hardens his neck, Will suddenly be destroyed, and that without remedy.

2 When the righteous are in authority, the people rejoice; But when a wicked man rules, the people groan.