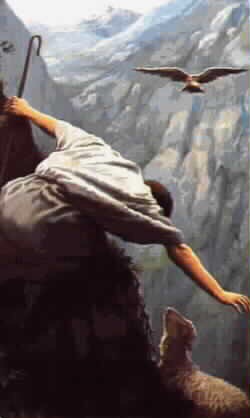 The hardest obstacle for peope to overcome in finding salvation is realizing that they need it. We are so quick to judge and condemn others for their sins, but so slow to see the depth of our own wickedness. In the two short parables of the lost sheep and the lost coin, the key to understanding their meaning is found in the context given by verses 1-2. The religious leaders are angry that Jesus is spending time with people whom they saw as obviously bad. The tax collectors basically cheated and stole money from the Jews, giving Rome its share but keeping extra for themselves. The other “sinners” mentioned may have been petty criminals or simply poor people who did not keep all of the ceremonial Jewish laws and customs. Regardless of how many or what specific sins the people near Jesus had committed, their sins were public enough to draw hatred from these outwardly righteous Pharisees and scribes. The religious leaders did not think that such people deserved God’s love and forgiveness. But Jesus confronts these hardhearted haters with their own need for forgiveness through the stories of the lost sheep, the lost coin, and the lost son (mentioned in an earlier post “The Parable of the Father’s Love”).

With both the lost sheep and the lost coin, the main point is that everybody is lost and needs to be found by God’s amazing grace. God’s heart is full of compassion and mercy toward lost sinners. He eagerly waits for us to recognize our sinfulness, humble ourselves, and come to Him in repentance and faith. His angels rejoice when even one lost sinner comes home. He wants to send His ambassadors, Christians like us, to bring His offer of free grace to everyone we know, pleading with them to turn from their sins and trust in Jesus Christ for salvation. When you were lost and did not want God in your life, He sent people after you. When I was a teenager who did not know the Lord, people from a healthy church came looking for me. I was the lost sheep and the lost coin, and so were you. Even if you were raised hearing the gospel from a young age, God was still patient and kind with you until the light bulb went off and you saw your own sinfulness and need for forgiveness. He continually sent loving people into your life – parents or teachers or coaches or friends – who showed you the truth of the gospel in the love and joy they poured into your life. It was God’s kindness that led us to repentance. In fact, it is only the people who have not seen their own lostness who are unable to be saved. You must realize that you are lost before you can be found.

1 Then all the tax collectors and the sinners drew near to Him to hear Him. 2 And the Pharisees and scribes complained, saying, “This Man receives sinners and eats with them.” 3 So He spoke this parable to them, saying:

4 “What man of you, having a hundred sheep, if he loses one of them, does not leave the ninety-nine in the wilderness, and go after the one which is lost until he finds it? 5 And when he has found it, he lays it on his shoulders, rejoicing. 6 And when he comes home, he calls together his friends and neighbors, saying to them, ‘Rejoice with me, for I have found my sheep which was lost!’ 7 I say to you that likewise there will be more joy in heaven over one sinner who repents than over ninety-nine just persons who need no repentance.

8 “Or what woman, having ten silver coins, if she loses one coin, does not light a lamp, sweep the house, and search carefully until she finds it? 9 And when she has found it, she calls her friends and neighbors together, saying, ‘Rejoice with me, for I have found the piece which I lost!’ 10 Likewise, I say to you, there is joy in the presence of the angels of God over one sinner who repents.”

1. When did you first begin to understand your own lostness and need for God’s forgiveness and love?

2. Are there any people in your life that you are judging or condemning right now? If so, how would God want you to handle those thoughts and feelings based on today’s passage?